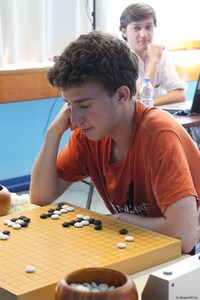 Title: 3rd European Go Grand Slam TournamentDate: 28th April  – 1st May 2017Venue: Berlin / Germany, Chinese Culture Center (« Chinesisches Kulturzentrum »), Klingelhöferstraße 21, 10785 Berlin http://c-k-b.euAddress: Klingelhöferstraße 21, 10785 BerlinThis is an invitation-tournament of the European Go Federation for 12 players with one preliminary round and 3 final rounds. The 4 winners of the 8 participants in the preliminary-round qualify for the three final rounds. Four Professional players, certified by the EGF are already qualified for the final rounds.Tournament for 12 playersEach player must be citizen of an EGF member-country for at least 10 yearsEach player must be « active » in the EGD between 1st April 2016 and 31st March 2017How to qualify ? Who is qualified right now ?5 Professionals certified by EGF (Ilya, Ali, Mateusz, Pavol, Artem) – definite2 players from Bonus-Point list, yearend 2016 (Thomas, Viktor) – definite2 players from EGD plus Bonus Points 2016 (Alexandre, Andrii ) – definite2 players from Grand Slam Qualification Tournament 2017 (Tanguy, Nikola) – definite1 player by wildcard used by CEGO, will be decided end of March 2017 (…) Name : Thomas Debarre
Nationality : France
EGF Rank : 6D
Hi, I’m Thomas Debarre, I live in Paris. I started playing go when I was 7 : my father had some friends who liked to play together and since I was very found of games, they taught me how to play go. A few months later, my father discovered he had a colleague who played go, so his son and I started going to the Strasbourg go club, which was great for kids like me since it was in a school and not in a bar. After that, I have improved rather steadily up to my current level, which I have reached in 2010. Because of my studies (I’m a first year student in an engineering school), I’ve almost stopped playing tournaments these last two years, but I’m starting to play a little more this year.
Achievements :
French champion 2010, 2011, 2012, 2013
4th place at European championship 2012, 2013
4th place at WAGC 2011