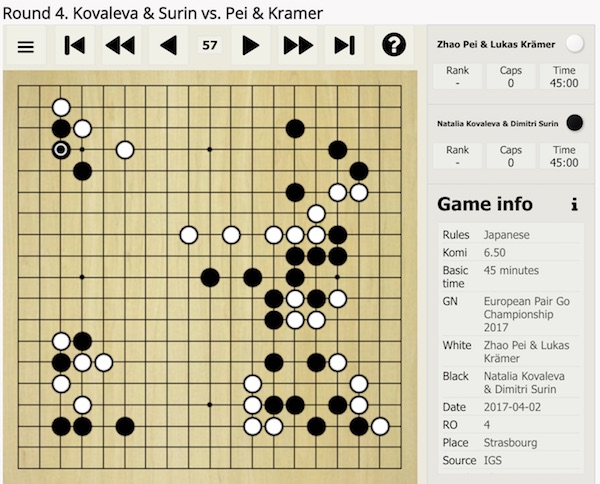 The 2nd day of the tournament came with high expectations for the players. Some decisive games were about to take place and the time pressure would do anything but make the battles any easier. As a participant I certainly believe that the 45 minutes sudden death raised my adrenaline during all of the games. It probably did the same for Germany’s Zhao Pei & Lukas Krämer during round 4. As one of the two pairs who had 3 wins from the previous day, they were paired with the only other pair with 3 wins: Russia’s Natalia Kovaleva & Dimitri Surin. Even though the German pair was leading the game, the time pressure had the final say, and after losing quite many points in the endgame, they ultimately lost by 1.5 points with 6 seconds left on the clock. Another dramatic game from this round was the one between Macha Jumelin & Tanguy le Calve and Julie Artigny & Benjamin Papazoglou. Both pairs had considerable time problems and Jumelin & le Calve passed when they had merely 4 seconds left on their clocks and Artigny & Papazoglou, who were probably taken by surprise with such a pass, and who themselves had only 10 seconds left, just passed as well. So what should happen when both sides have passed, but the territories are not enclosed yet? There is a Japanese rule that explains what should be done in this case and the solution is counting the points in a very special way. After the intervention by the referee and after counting according to this rule, Jumelin & le Calve were the winners. (…)